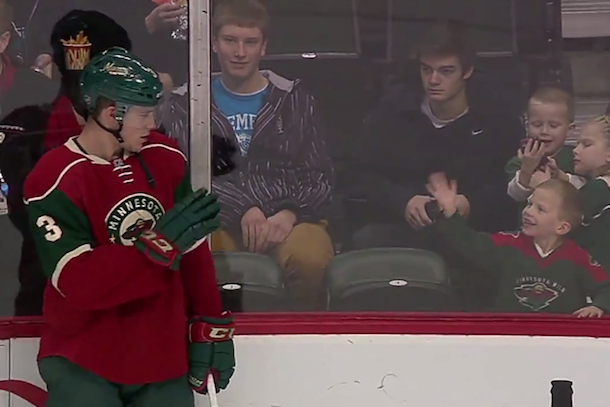 My kids did a hockey camp this week. This was the first time either of them had been on the ice in a couple months, so they both really enjoyed being back out there and came out of the week even more excited for next season. To go with that feeling of anticipation, I decided to write about some of my favorite inspirational hockey quotes for kids.

Just like adults, kids can sometimes get bogged down in the mundane and need reminders to help them shrug off whatever is holding them back and focus on what is important. And a lot of times, those reminders are more effective when they’re expressed in a succinct, easy-to-understand way.

The interesting thing about inspirational words, at least in my opinion, is that they usually don’t say anything that people don’t know already. It’s how the message is expressed – and sometimes the stature of the person who said it – that makes it inspiring.

Whether they’re about tangible things like technique, or intangibles like work ethic and stepping outside of a comfort zone, I hope that these quotes provide inspiration for young hockey players because they relate to a lot of the important lessons that youth hockey can help kids learn.

What better way to start off than with a quote from The Great One, right? Gretzky may have been talking about hockey in a literal sense, but he was also making a much larger point, one that applies in situations that go far beyond whether to shoot a puck at a net in a hockey game.

Gretzky’s point is that we have to take chances in life if we want to achieve our objectives. Taking a shot on goal might seem 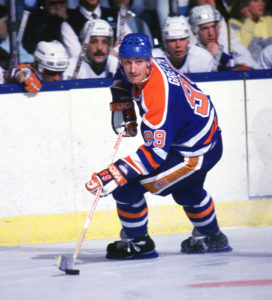 pointless and like it’s destined for failure, but there’s always a chance of success – as long as you take the shot.

When you boil it down, what Gretzky is talking about here is the idea of not letting fear – of failure, rejection, negative feedback, embarrassment – stop us from trying.

This is something that kids will face in a variety of situations in hockey: whether to take a shot, whether to try making a move around a defender or just dump the puck into the corner, whether to try out for a higher-level team. And they’ll face it in countless other situations: whether to audition for a play, whether to ask out someone they like, whether to apply to a certain college. And on and on as they go through life.

The lesson for young hockey players is to take a shot. The worst that can happen is the same as if they didn’t take a shot. And, maybe the shot will go in.

On The Importance Of Technique

“This much is AUTOMATIC, the more you bend your knees – whether you are skating forwards, backwards, or turning – the better your control, balance, speed, and power.” – Robby Glantz

Robby Glantz is a power skating coach who has worked with the Los Angeles Kings and Anaheim Ducks, as well as individual players including Sidney Crosby, Jonathan Toews, Seth Jones, John Tavares, and more. With that kind of client list, it’s a pretty good bet that he knows what he’s talking about when it comes to skating.

This quote is a perfect example of what I talked about above – where it’s not saying anything that unique, but it carries weight because of who said it. Most kids that play hockey have heard the same thing about knee bend before, either from parents or their team coaches. Sometimes, though, they absorb the message better if they hear it (or hear it quoted) from someone that they don’t interact with on a regular basis, especially if that person has a lot of credibility.

More than just the specific relevance to hockey, there’s a larger message to take from this quote – one that may not be obvious to kids immediately, but that hopefully they will internalize as they get a little older. That’s the message that how you do things makes a difference.

Like anything else, skating styles will have some variation from one person to the next, but there also are some fundamental mechanics that everyone should work on. That idea holds true in a lot of other aspects of life, so the bigger picture of this quote is that if you do things the right way, even though it might be harder, you’ll get better results.

On Taking The Initiative

“We’re not going to be sitting around waiting for something to happen. We’re going to make things happen for ourselves.” – Herb Brooks

This is one that has a lot of relevance in youth hockey, and to illustrate that I’ll tell you a story.

Early last season, my son’s Squirt team played a team that had a dominant player. He was a good skater, a really good stickhandler and shooter, and he was a tall kid, with a long reach.

My son’s team was a little cautious and backed up when this kid got the puck, not wanting to lose a one-on-one puck battle and 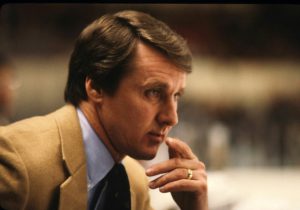 get caught behind the play. Of course, in doing that, they actually made him even more dangerous, because they were allowing him room to build up speed. That made it easier to get around them and get good scoring chances. My son’s team ended up losing the game 5-2; that one player scored four goals and assisted on the other.

About a month later, the two teams played again, and my son’s team played completely differently. They pursued pucks aggressively and always had a second player supporting. That was the case not just when the other team’s star player was involved, but in all situations. As a result, that player didn’t have the puck on his stick as much, and when he did, he didn’t have the time and space he had in the first game. It was still a very close game, either tied or a one-goal game until the last couple minutes, but my son’s team ended up winning 4-2.

The third and last time they played, my son’s team played the same way as in the second game, except maybe even more effectively, because now they had confidence that if they played that assertive style they would have success. It was a total reversal from the first game; they won 7-3.

This story encapsulates something that I see a lot in youth hockey. When kids are passive and reactive instead of assertive and proactive, things don’t go as well for them. Sometimes it seems like kids are waiting for the perfect circumstances – the puck just happens to come right to them, and there’s nobody between them and the goal – but hockey almost never works that way.

Watch any youth hockey team play and you’ll see that the best players, the most effective players, aren’t always the ones who have the most skill. They’re the ones that are the most involved, the most proactive. They don’t wait for the other team to make a mistake and give up the puck, they pursue the puck carrier and force a turnover.

Like the other quotes, the message behind this one is relevant in a lot of situations. Whenever we want something in life – a raise at work, a new job, a relationship – it’s more likely to happen if we take the initiative.

On Not Taking Things For Granted

OK, since I couldn’t find a source for this one, I have no way of knowing if it was first said in relation to hockey, but most likely it wasn’t. Still, it’s a quote that you hear a lot in hockey circles, and it certainly holds true in hockey, just as it does in pretty much anything.

Like I said above, on any youth hockey team, the best players aren’t always the most talented ones, they’re the ones who work the hardest and are the most assertive. The same is true at a team level; if a team outworks their opponent, they have a good chance of winning, even if the opponent has more talent. I’ve seen both of my kids’ teams wind up on both sides of that equation.

Learning that talent or natural gifts can only take you so far is an incredibly valuable lesson for kids. If they don’t learn that early in a relatively low-stakes setting like youth hockey, it’ll be more painful when they do come to terms with it later, when there’s more on the line. They might realize when they graduate from a good college that their degree doesn’t guarantee them the job they want. Or maybe they’ll have trouble in relationships because they relied on their charm and good looks and didn’t work on becoming a better person.

Regardless, this quote crystallizes one of the most important things kids can learn in hockey, and the fact that they can see the truth of the words play out on the ice means they’re more likely to carry the lesson with them into the rest of their lives.

“Go out and have fun, and let’s see what happens.” – Doug Orr

“Have fun right now. If you do pursue this career, you’ll have plenty of opportunities to take hockey very, very seriously. But right now, just appreciate and build on whatever you love about the game. Enjoy hanging out with your buddies on the ice. No matter how big you make it, you’ll miss that time when it’s gone. Try that move out, look silly, and get better.” – Johnny Gaudreau 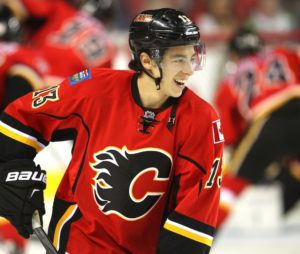 hockey. It should be fun, especially when you’re young. That doesn’t mean that kids can’t work hard, learn, and grow in hockey. Of course they can; those aren’t mutually exclusive with having fun.

Kids should enjoy the moment with hockey. Most likely they won’t gain a career out of it, but they can build friendships, develop self-confidence, and learn about themselves. Those traits will serve them well no matter what their path in life.

Those are my favorite hockey quotes to inspire kids. What do you think about the inspirational value of these quotes? Do you have any others that you think are especially relevant for young hockey players? Please share your comments and any questions below – thanks!