Hi, my name is Jordan.  I created myhockeybag.com for a very simple reason – I love hockey.  I want to help you by providing content that you find useful.  That could be in the form of articles about hockey gear (including equipment bags!) and other hockey products and services, thoughts and advice on a hockey “lifestyle” (e.g., aspects of being a hockey parent, among other topics), and other hockey-related subjects. 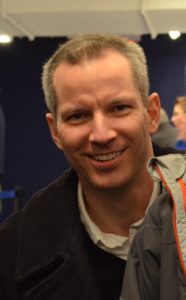 Ultimately, I want every piece of content posted  on this website to add value for you, either by being informative, thought-provoking, or entertaining.  If a post can be more than one of those at the same time, all the better!

When I was a kid, my older brother’s best friend was a hockey player.  He lived down the street from us, and sometimes I would tag along to his house with my brother to play.  One of my more vivid memories is of playing floor hockey in the basement.  Well, I was mostly in the “penalty box,” which meant I had to stand two steps up on the stairs so I wasn’t in the playing area.  Then my brother’s friend would yell “POWER PLAY!” and whiz around the unfinished basement on roller skates before winding up for a slapshot.

One day when I was in kindergarten or first grade, a friend brought a trophy to school for show and tell.  He had played in a hockey tournament over the weekend.  I guess that sparked something in my head.  Maybe I thought it would be pretty cool to have a trophy, or maybe I thought if I played hockey I wouldn’t get arbitrarily stuck in the penalty box when my brother and I played at his friend’s house.

It was probably a combination.  Anyway, I went home and told my parents that I wanted to try hockey, that my friend said that I didn’t have to know how to skate already (lots of kids didn’t, he said), and it was going to be awesome.

Well, try it I did – and I hated it, so I didn’t play again for several years.

Eventually I had a second beginning with hockey, and it went very differently.  I don’t know why, but the second time around I was hooked, and it’s stayed that way ever since.

WHAT’S IN A NAME?

When I first started playing hockey as a kid, I didn’t get an equipment bag at first.  Maybe that was because I got my equipment from a few different places before I started playing – gloves and pants here, skates and helmet there, etc. – so it didn’t occur to me, or my hockey-inexperienced parents, that I would need a bag to carry all my gear.

We weren’t thinking about the fact that eventually I was going to need to carry all of my equipment around at the same time, and I wasn’t an octopus!  I think we realized it when it came time to go to my first practice, and I had no choice but to put on most of my equipment at home and awkwardly carry the rest into the rink.

We got an equipment bag very soon after, and that made things easier, but those were different times.  There weren’t nearly as many options available back then.

Now, as the father of two hockey-playing kids, I have new appreciation not just for hockey equipment bags in general, but for the variety in design styles and features found in the bags, the equipment, and all of the other hockey products and services available today.  That said, all that variety can make the process of choosing the right gear a little overwhelming.  That’s why I’m glad you found myhockeybag.com.

My goal is to provide you with the information you need to find hockey equipment, hockey bags, and other hockey products and services that you will be happy with for a long time.

If you ever need a hand or have any questions, feel free to leave a comment below and I will be more than happy to help you out.

2 thoughts on “About Us”