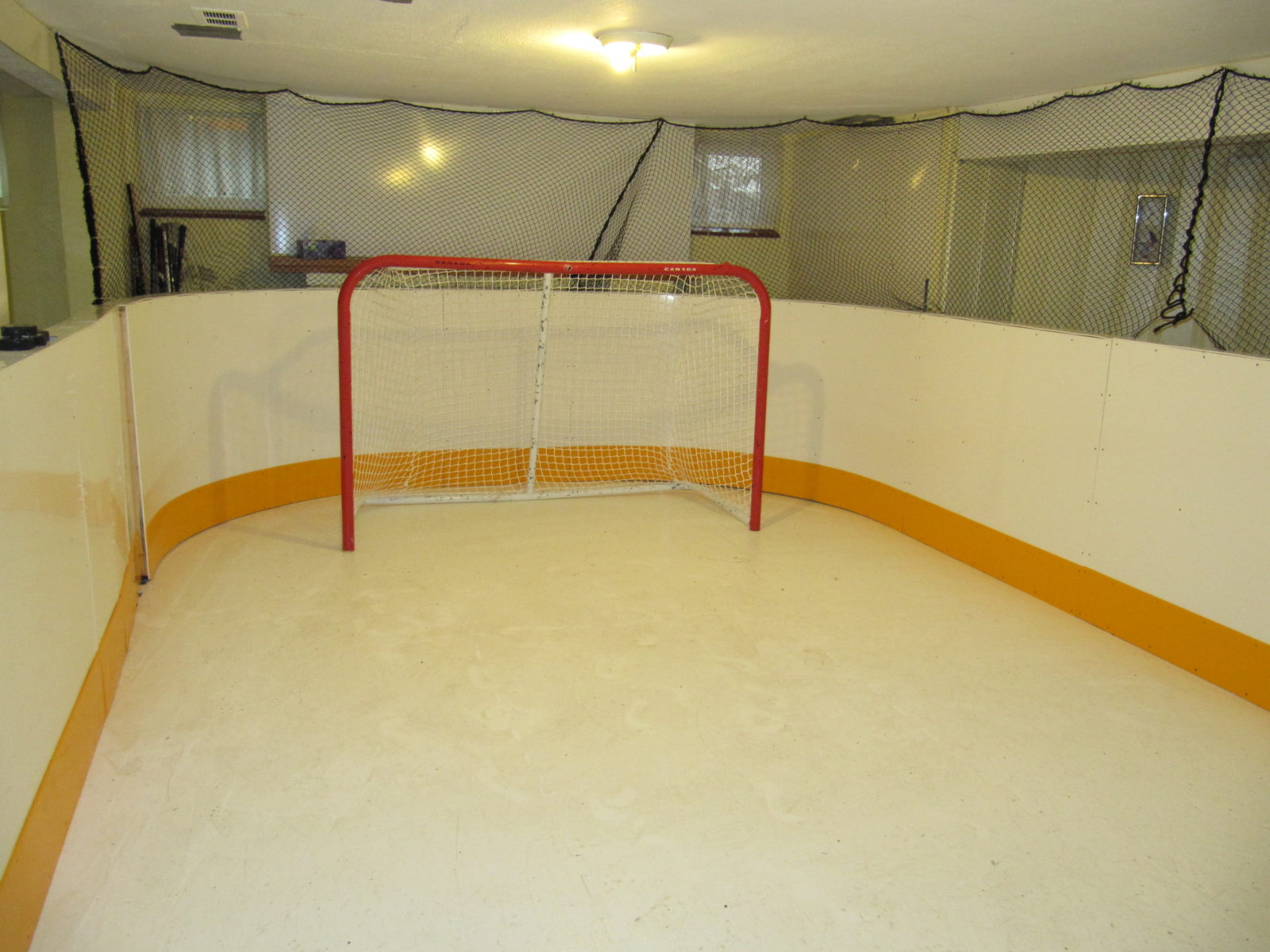 Today I want to talk about synthetic ice for skating. In my last post I looked at a few different types of hockey shot pads, and one of those was the interlocking tiles. The cool thing is, there are different types of tiles that can be used for different things. While the previous post was focused on pads for shooting and stickhandling work, and the tiles I mentioned there are great for that type of training, there are other kinds of synthetic ice tiles that you can skate on as well.

The tiles for skating can be used for shooting and stickhandling practice too, of course, and virtually any other skill. So they really allow you to work on your entire game in an integrated way (with a couple caveats, which I’ll address).

There are always drawbacks, though. The skateable tiles are no exception, and I’ll discuss the downsides below too. Still, depending on the situation, the skating tiles can be an amazing way for a player to have fun, work on their skills, and make a huge developmental leap in their game.

How Do They Do That?

Let’s start by talking about the difference between the two categories of synthetic ice tiles. It’s pretty simple – the skateable tiles are made with a 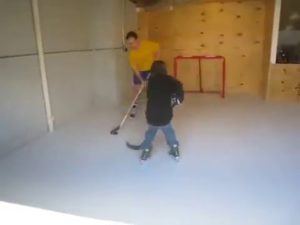 different kind of plastic than the non-skateable tiles that I mentioned in my post about shot pads. The material in the skateable tiles is stronger and more resistant to impact, so it’s able to handle skate blades.

One word of caution, though. Most skateable tiles are not designed to withstand toe picks, so figure skaters can do spins and edge jumps only. For hockey skates, there’s no issue.

There are also different types of skateable tiles. Some are infused with a lubricating agent that makes the surface slippery, while others aren’t and need to have a lubricant or “glide enhancer” applied every so often. The self-lubricating type has the obvious benefit of maintaining its glide factor. On the other hand, this type also can attract and show dust and dirt more easily.

Are You Feeling It?

Back in the day, synthetic ice was a really poor substitute for the real thing. There have been some major advances in the technology over the last few decades, though, to the point where lots of current and former professional players now have synthetic skating tiles at home – either to work on their own skills or for their kids, or both.

Modern-day synthetic ice is much better; it has 10-15% more friction than real ice. That’s certainly enough to notice a difference, but it’s not so 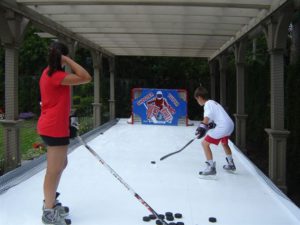 extreme that it is detrimental to a skater’s technique, or hard to get used to going from one surface type to the other.

I should also mention that the 10-15% difference in friction between synthetic ice and real ice is based on a freshly-resurfaced sheet of real ice. As we all know, if real ice doesn’t get resurfaced regularly, it gets noticeably slower. So, if the measurement was taken on real ice after it had been skated on for a while, the difference in the coefficient of friction compared to synthetic ice probably would be even less than 10-15%.

Of course, that comes with the caveat that non-infused synthetic ice also could have increased friction if the glide-enhancing lubricant isn’t applied. Still, the lubricant doesn’t have to be applied nearly as often as real ice needs to be resurfaced. And with the infused tiles, skating on them doesn’t increase the friction level at all, it remains constant regardless of usage.

The slightly higher friction with synthetic ice compared to real ice does have some benefits. It forces skaters’ muscles to work just a tiny bit harder, so when players get back on real ice they are quicker and stronger on their skates. For beginning skaters, the higher friction makes it a little easier to maintain their balance and not have their feet fly out from under them.

One perceived downside of synthetic skating tiles is the maintenance, so let’s take a look at that subject. As I said, the non-infused type of skating tiles need to have a glide-enhancing lubricant applied periodically. How often depends on how much the tiles are being used, but 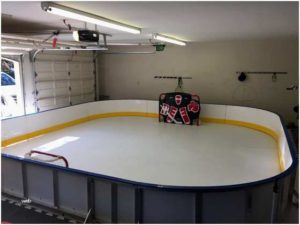 rest assured that it wouldn’t even be close to a weekly task if the tiles were in a residential setting. And that brings up another point – the non-infused tiles are more common in non-residential settings (public rinks, training centers, etc.) than they are in private homes. That’s probably partly because the infused tiles offer no-additives-needed consistency regarding friction.

Another drawback is that most synthetic tiles do produce some shavings, just like real ice. From everyone I’ve spoken with, it’s less than the amount of snow that would be produced by skating on real ice, but it’s worth mentioning. Cleaning up the shavings is straightforward – just sweep them up with a broom and put them in the trash.

Related to the shavings, skating tiles usually cause skate blades to dull faster than they would on real ice, so that means players skating on tiles need to sharpen their blades more frequently.

Finally, there’s the question of caring for the tiles. I mentioned above that the infused tiles can attract dust and dirt more quickly, but both types of tiles should be washed every so often with a mild soap and water. If infused tiles aren’t cleaned often enough, they can develop darker “grout lines” along the panel seams.

As you might expect, synthetic skating tiles aren’t cheap. Prices vary based on the brand, the thickness of the tiles (this relates to the expected lifespan), and the total square footage purchased. However, for a small surface area of 128 square feet, the cost will be anywhere from $850 to 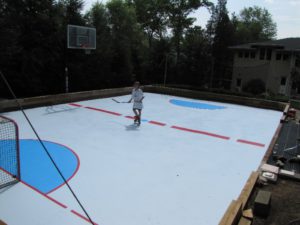 $1300. A larger surface area generally will have a lower cost per square foot, but of course it still will cost more overall.

The cost is definitely a drawback, but for those who can swing it, synthetic ice may actually be a sensible expense. When you add up the costs of sticks and pucks sessions (especially for families with more than one player), plus the cost of gas getting to and from the rink for those sessions, the synthetic tiles start to look like a good investment.

At my local rink, which has two sheets of ice, sticks and pucks sessions cost $10, and can run anywhere from 1.5 to five hours.  On a side note, I don’t know why they charge the same amount for a 1.5-hour session as for a session that’s two or three times longer, but that’s neither here nor there.

Next, let’s look at the cost of gas to get to all those sessions.  Every case is going to be unique, but I’ll just use mine as an example.  I live just over eight miles from the rink, so I’ll round down and put the round trip at 15 miles total.  Obviously the price of gas fluctuates, but I’ll estimate gas at $2.50 per gallon.  That’s quite a bit lower than current prices where I live, and lower than the national average, but I’d rather use a conservative estimate.

If we assume average gas mileage of 25 mpg, that means that gas for each round trip to the rink for sticks and pucks costs about $1.50.  For a total of 40 round trips in a year (assuming the parent and kid who goes 15 times go to sessions that the other kid is already going to), that’s $60.  Add that to the admissions costs and the total now stands at $660.

Now let’s think about how much extra money might be spent while at the rink for those sticks and pucks sessions.  I’m talking about the bane of any hockey parent’s existence – the vending machines and snack bar.  I’m going to add an additional $40 for those ancillary expenses, which brings the total to $700.  I think the $40 probably is too low – with 40 trips, when just a Gatorade costs $2, I recognize that some families might spend much more – but again, I’d rather be conservative.

Skateable tiles have a lifespan of at least 3-5 years.  Depending on the model, the lifespan can be up to 20+ years.  For families that go to as many (or more) sticks and pucks sessions as the hypothetical one we used for the calculations, synthetic ice could make more sense.  Sticks and pucks for that family will cost, on the conservative side, $2100 over three years.  Depending on the brand and the thickness of the tiles, that would buy 240 square feet (or more) of skateable tiles.  That is for tiles with at least a 5-7 year lifespan; for tiles with a 3-5 year lifespan, the footprint would be well over 300 square feet.

One other thing to keep in mind is that if a player is serious about their game and takes private lessons, there’s a good chance that they could have a coach come to their home and work with them on the synthetic ice there for a significantly lower price, since that eliminates the additional costs built into the pricing at a rink.

Related to that, having skateable tiles at home might even reduce or eliminate the need for private lessons.  Think about that hypothetical family.  Maybe one of the parents, or an older sibling, would like to get on the ice to help a kid, but they can’t do it at sticks and pucks because the session times conflict with their schedule.  Or maybe the kid wants help, but they’d rather not be seen getting a “lesson” from a family member in front of other people at sticks and pucks.  With synthetic ice at home, that problem is resolved.  Of course, some kids don’t want to take pointers from a parent or sibling, no matter where they are, but some kids do.

I hope this post has been useful for you. I plan to delve into the topic of skateable synthetic ice tiles a little more in the future so I can highlight some of the key differences between brands. Please keep an eye out for that in another post.

Meanwhile, what do you think about synthetic ice? Have you ever skated on it, and if so, what was your experience like? If you haven’t skated on it, is it something that you’re interested in trying? Why or why not? I’m really interested to hear your comments and questions on this!

16 thoughts on “Synthetic Ice For Skating – A Primer”