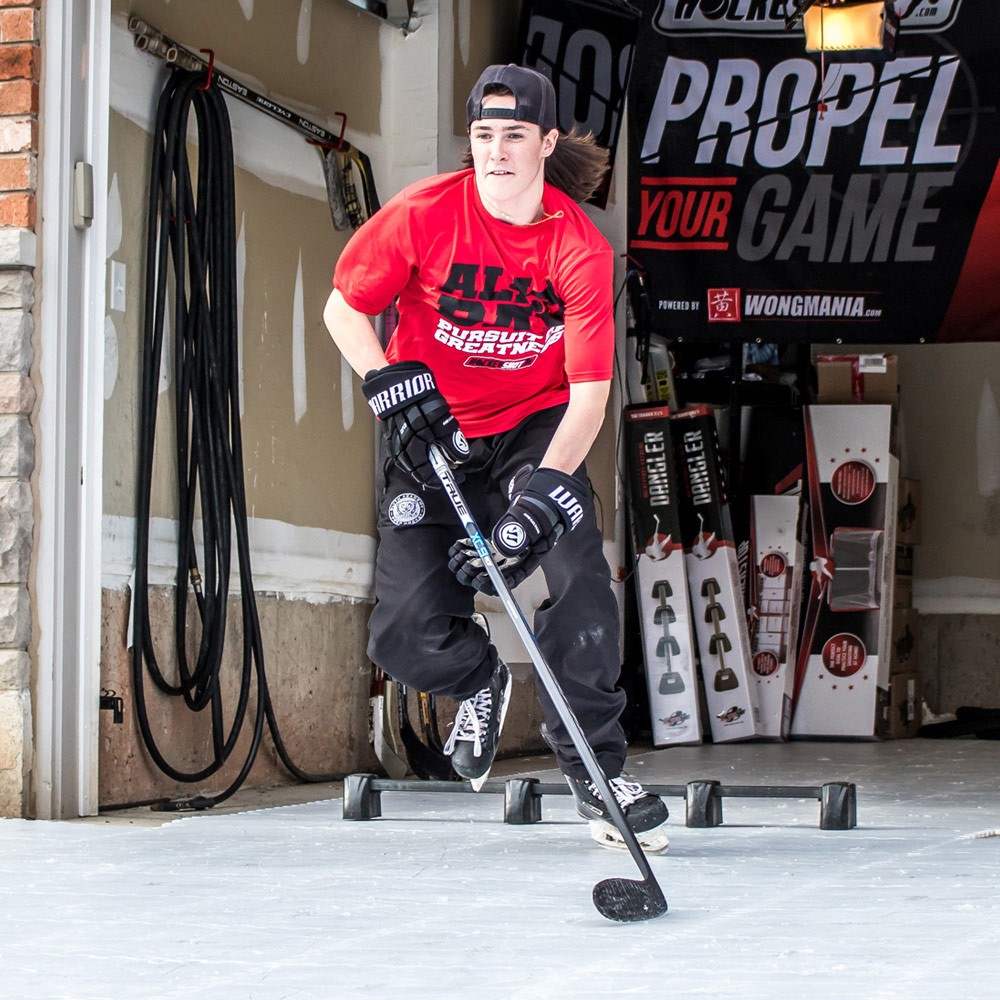 Recently I wrote a post about synthetic ice on a general level, and said that I would be writing more about the topic. So, today I want to talk about HockeyShot synthetic ice tiles.

HockeyShot has two different types of synthetic ice tiles for skating, plus a line of non-skateable tiles that can be used for shooting, stickhandling, and passing practice. For the purposes of this post, we’re only going to look at the two skateable tile options.

HockeyShot’s Revolution tiles (pictured here) are 18.5″ x 18.5″ and have puzzle edges to connect together, so after they are connected, each tile works 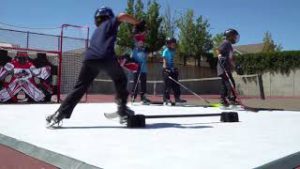 out to 18″ x 18″ of skateable surface, or 2.25 square feet. The tiles are available in two thicknesses: regular is 7/16″, and premium is 7.5/16″. Other than the thickness and the corresponding difference in expected lifespan, there is no difference between the regular and premium versions of the Revolution tiles.

For the regular Revolution tiles, the expected lifespan is 3-5 years, while for the premium version it’s 5-7 years. It’s important to note that the Revolution tiles have one skateable side, not two like the Extreme Glide tiles.

For the Extreme Glide tiles, the expected lifespans are as follows:

Those lifespans are approximate, of course, and will vary depending on how much they are used. The estimates for both the regular and premium Revolution tiles, as well as the residential estimates for the Extreme Glide tiles, are assuming normal usage in a family setting – not several hours a day, every day.

There is a difference in the construction, though, and this is probably the main factor in a slightly different feel when skating between the two types of tiles. As I mentioned, the Revolution tiles have a ribbed support structure underneath the surface; by contrast, the Extreme Glide tiles are solid, and have little to no elasticity. This makes them feel a little more natural when skating than the Revolution, which feel a bit hollow. It’s hard to explain that, and it’s not a major difference, but you can feel it if you do a back-to-back comparison.

Since the Extreme Glide tiles are larger, you won’t need as many to get the same total square footage of skating surface as with the Revolution tiles. That could be either a positive or negative for either kind of tile, depending on your 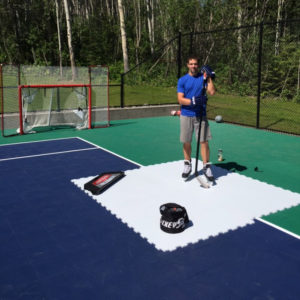 On the other hand, that is the whole reason why the Revolution tiles are designed with some elasticity – so they can be used on uneven surfaces without the seams popping out. That means a driveway that isn’t completely flat might be a better candidate for the Revolution tiles than the stiffer Extreme Glide tiles.

The advantage of the Extreme Glide tiles on this front is that it’s much more likely that an irregularity in an otherwise level surface could fit entirely under the middle area of a panel, so it doesn’t put pressure on a connection seam. As an example, I have a divot in the concrete floor of my garage; it’s probably 1″ deep, 2-3″ wide, and 12-16″ long. With the Extreme Glide tiles, the divot probably would not be anywhere near a seam, but with the Revolution tiles, it probably would. And even if not, the elasticity in the Revolution tiles means that the tile might flex when skating over the divot, which obviously would not be ideal. Of course, if the Revolution tiles are the preferable option for a customer except for an issue like this, the best option would be to fill in the divot to make the floor level.

When it comes to installation, the Revolution tiles really can’t be beat. They’re very light (2.2 lbs per tile), so one person can carry them easily. No special tools are needed for assembly, just a rubber mallet to connect the tiles.

The Extreme Glide tiles (pictured here) are relatively easy to assemble as well. The big difference is that the tiles are larger and heavier, so two people 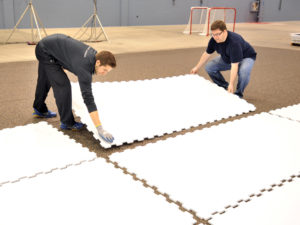 There are some things to be aware of for both the Revolution and Extreme Glide tiles. First, the toe picks on figure skates will damage the tiles. Second, because of the higher friction levels compared to real ice, skates will need to be sharpened more often than when skating only on real ice. These same points also hold true for most varieties of synthetic skating tiles in general.

Now we’re getting to the important part, right? There’s some good news and bad news when it comes to the cost of synthetic skating tiles, whether from HockeyShot or anywhere else.

The bad news is, they aren’t cheap! You can check the latest prices for the Extreme Glide tiles here, and for the Revolution tiles here. Keep in mind, there sometimes are volume discounts available.

HockeyShot recommends having enough tiles for at least 200 square feet of skating surface, which I think makes sense. Otherwise there’s not enough room to make it worth being on skates. Obviously a bigger skating area will allow players to work on more aspects of the game, but 200 square feet is enough to be very beneficial.

The good news is that depending on the situation, investing in skating tiles may be a better financial decision over the long run than other approaches to training. I discussed this in my earlier post about synthetic ice for skating.

Ultimately, the question of which, if either, of the two types of HockeyShot synthetic ice tiles is better for you depends on your own situation. For people who are looking to get the most bang for their buck when it comes to hockey training, I suggest crunching the numbers in a similar fashion to what I did with a hypothetical example in my other post about synthetic ice. Be realistic about how much you will spend on sticks and pucks sessions and the related costs, and try to forecast that over a few years. If you don’t think you will spend as much as you would on the skating tiles, then that is your answer.

That being said, if the numbers indicate that skating tiles are the smarter approach financially, or if the financial aspect isn’t the be-all and end-all (i.e., you’re willing to spend more for convenience, coolness, etc.), then you still need to assess your situation to decide between the Revolution and Extreme Glide tiles.

The Revolution tiles are less expensive per square foot than the Extreme Glide tiles (in any size or thickness). They also are more versatile in terms of being easier to disassemble, store, or reconfigure. And, they can be installed on a slightly uneven surface.

The Extreme Glide tiles provide a slightly better skating experience. They also have a longer lifespan, which, if both products are used to their full expected lifespan, makes them more cost-efficient than the Revolution tiles.

There are lots of things to think about for anyone considering investing in synthetic ice tiles. I hope this post has provided you with the information you need to move forward in the direction that’s best for you.

And now, I’d like to hear from you! Do you have experience with either line of HockeyShot skating tiles (or any other brands)? If so, what was your experience like? Please share your opinions, and of course if you haven’t skated on synthetic ice, please share your questions!