It’s been a couple weeks since Mitch Marner’s contract negotiations finally came to a close, with the young right wing signing a six-year deal to stay with the Toronto Maple Leafs for an annual cap hit of just under $10.9M. The general consensus in Leafs Nation is that the team overpaid, but what has been a little surprising to me is the degree to which fans have directed their anger towards Marner.

I might be in the minority on this one, but I’m going to go against the grain and say that I think it’s misguided for fans to be so angry at 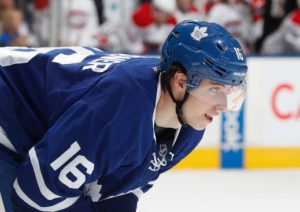 Marner, or hold a grudge against him. At least not unless they’re going to have the same feelings about both Leafs management and any other Leafs player that signs for more than “market” value.

Let’s take a look at why the Marner contract seems to have struck a nerve with so many Leafs fans.

Marner, who is now 22, quickly became a fan favorite when he joined the Leafs three years ago, and with good reason. He plays a really exciting style: he’s a fast, shifty skater and has dazzling creativity with the puck; he works hard in all three zones; and even though he’s on the smaller side (he’s listed at 6’0″ and 175 lbs, which I think is a little generous) and doesn’t throw his body around, he’s not afraid to play in the tough areas.

He’s also very well-liked among his teammates and brings a lot of positive energy to the rink every day. That’s a great quality to have in any player, but it’s even more valuable when it’s one of the team’s most high-profile players in a city like Toronto. That kind of energy can rub off on the rest of the team so the pressure of playing in a fishbowl of media and fan attention doesn’t have a negative effect.

Last season, Marner made the jump from budding young star to bona fide superstar. By the end of the season, he was kind of like Ferris 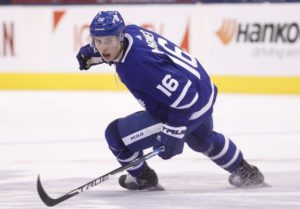 Bueller, popular with all different crowds. Old-school fans appreciate that he’s a finesse player who will block a shot when necessary. Kids want to learn his ridiculous stickhandling moves. And everybody likes his friendly, down-to-earth personality.

So why have some people turned on Marner? I think it has to do with the bigger picture surrounding the Leafs, and there are a few things to address there.

A little over a year ago, the Maple Leafs were in the same position that they were in this summer – trying to get one of their most talented 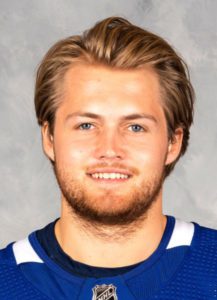 young players signed. The difference is, when they couldn’t reach an agreement with William Nylander last year, they were willing to go into the season without him. Nylander (pictured at right) ended up sitting out the first two months of last season before signing a six-year deal with an average annual value of just over $6.9M.

That deal was signed as late as it could possibly be; league rules dictated that if Nylander wasn’t under contract by December 1, he would have been ineligible to play in the NHL last season. Clearly the Leafs were worried about their chances of success last year without Nylander. Not about making the playoffs, but about making a run once there. Well, having Nylander didn’t help them – they lost to Boston in seven games in the first round for the second year in a row.

Nylander didn’t play well in the playoffs, but at that point, who was surprised? He didn’t play well in the regular season either after signing his contract. As I said in another post, the biggest reason for the Leafs losing to the Bruins was Nazem Kadri’s meltdown. But the playoff failure highlights the shortsightedness of signing Nylander two months into the season.

Basically, the Leafs decided to stand firm in their negotiations with Nylander throughout the summer and training camp last year. When it got down to the wire, though, they caved in. Why? Probably because they thought he would come in and make the team even better – in the regular season, but more importantly in the playoffs.

Two things wrong with that. First, generally speaking, when a player holds out and misses training camp, it takes them a while to get back to their normal level. And if the holdout extends into the regular season, that’s even worse. The Leafs should have anticipated that Nylander wasn’t going to be the same player he would have been if he had been with the team since training camp. At the beginning of December, they might as well have just forged ahead for the rest of the season without him, since they weren’t going to get the version of him they wanted at that point anyway.

Second, when they did sign him, they still paid him more than they should have, in my opinion. And I’m not talking just about last season because he was a disappointment after coming in late. I mean I think his cap hit for the remaining five years of his contract is still too high. And the decision to give him that contract has had repercussions.

A Constellation of Stars

The Maple Leafs signed John Tavares as an unrestricted free agent in July 2018 to a seven-year contract at an $11M annual cap hit. Tavares is a great player and I think the Leafs are a legit Stanley Cup contender because they signed him, but I do wonder – could they have gotten him for less, so they would alleviate some of the salary cap constraints they knew they would be facing very soon?

Tavares is from the Toronto area and grew up as a Maple Leafs fan. It was no secret that the Leafs were the team he wanted to go to when he entered free agency. If they could have signed him for just a little bit less – say, a $10.5M cap hit – that would have not just saved them that money, it also would have set a lower precedent for the other key players that they knew they would need to sign in the near future: Nylander last year, Marner and Auston Matthews this summer. And after the trades they made in 2019, you can add Jake Muzzin and Tyson Barrie to that list for next summer, as they’ll both be unrestricted free agents after this season.

I think most people would agree that with the lineup they currently have, the Leafs have a real shot at winning a Cup. That’s part of the reason why I can understand paying a premium for Marner. Just like Tavares or Matthews, I think Marner is a key to their chances. Take any one of them out of the picture and the Leafs go from a favorite for the Cup to simply a playoff team, and that’s a big difference.

In my opinion, Nylander doesn’t have that same indispensable quality as the other three, or defenseman Morgan Rielly, for that matter. That’s nothing against Nylander. The fact of the matter, though, is that he is a pretty one-dimensional player, and while he has shown that he is good at that dimension (offense), he hasn’t shown greatness. Additionally, the one thing that he’s good (but not great) at happens to be where the Leafs have an abundance of riches.

Really, the Leafs fans that are pissed at Marner for putting the team in a difficult position regarding the salary cap are barking up the wrong tree. It’s the Leafs management that they should be angry with, because they set the wheels in motion last year by caving in to the demands of Nylander – a player who hadn’t (and still hasn’t) yet proven that he was/is as valuable to the team’s success as Marner now has proven himself to be.

Let’s also remember that the deal the Leafs gave Auston Matthews earlier this year is for five years, with an annual cap hit of over $11.6M. That’s over $700K more than Marner’s cap hit, and Matthews’ deal is one year shorter, meaning he’ll be up for a new contract, presumably with an even higher cap hit, a year before Marner.

I know lots of Leafs fans feel that Matthews is significantly more valuable for the Leafs because he plays center rather than wing, or because more of his points come from goals while Marner gets more of his points from assists. I would counter by pointing out the statistics that show Marner is stronger defensively, has missed only five games in three seasons compared to 34 games for Matthews, and has had more hits than Matthews in each of the last three seasons, despite being roughly four inches shorter and 50 lbs lighter than Matthews.

It’s unfortunate that the Leafs are in a tight spot with the cap this season and likely will be next year when they’ll have two important defensemen up for new contracts. But that’s no more Marner’s fault than it is Tavares’, or Nylander’s, or Matthews’. The Leafs gave each of the last three either more than the player might have been willing to sign for or, in the case of Nylander, more than they should have given if the player wouldn’t have signed for less.

Marner just happened to be the last one of this group of key players that the Leafs dealt with, but if Leafs fans want players to feel a moral obligation to sign for less than what they can get from the team, that expectation should be placed on all players, not just the guy that happens to be the last one in line.

Whatever fans think about the relative “market” value of Marner compared to other star players, both on the Leafs and around the league, 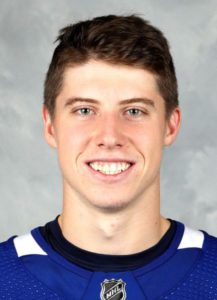 the team has everyone they want in the fold for this season, at least. Leafs management may be able to work some magic in the next year that will allow them to keep the players already signed for the long term and the players that I expect to be the most important to them after this season (Muzzin and Barrie).

If they can’t find a way to do that, it might turn out that this season is Toronto’s best chance to win the Stanley Cup in the foreseeable future. No pressure or anything, though.

I hope you enjoyed this post. Please use the comments section below to share your thoughts on how the Marner contract negotiations played out, on any of the other free agent signings in recent weeks, or about the upcoming season.