Well, the off-season has officially begun. Before we put a bow on the 2018-2019 season, I thought I would do an NHL playoff review – my thoughts on some of the biggest stories or takeaways from the postseason.

Now, just because it’s the off-season, that doesn’t mean there will be a shortage of hockey stuff to talk about, of course. The weeks between the end of the Stanley Cup playoffs and early- to mid-July are always busy in the hockey world. The NHL awards are this week, the draft is this coming weekend, and the free agency market opens on July 1.

A Star Is Born 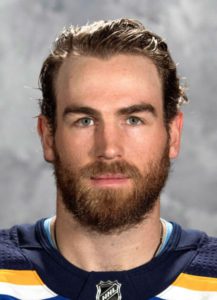 I’ll admit, I knew Ryan O’Reilly was a good player, but if you told me before the playoffs started that someone on the Blues was going to win the Conn Smythe Trophy as playoff MVP, I don’t think I would have put him in my top five predicted candidates. But wow, this dude was just awesome, especially in the final.

Maybe this past regular season was an indication of what was to come. In his first nine NHL seasons, O’Reilly’s career high was 64 points; this season, he had 77. So he had already shown a different level of offense than he had before.

Still, O’Reilly’s stock has gone way up after his playoff performance. It’ll be interesting next year to see how he responds to increased attention from the rest of the league. I have a feeling he’ll handle it well, because he has such a well-rounded game. He’s good on faceoffs, great defensively, tenacious in the offensive zone, and hardly ever takes penalties. 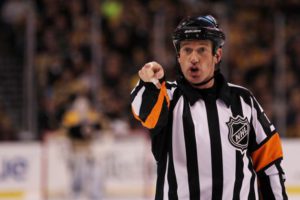 Still, it seems like there were an inordinate number of high-profile officiating blunders in the playoffs this year. They were high-profile for a couple reasons. First, many of them happened in circumstances where they appeared to have a direct impact on the outcome of a game, and in some cases a series. Second, they were so egregious that even fans who didn’t have a rooting interest in either team were stunned by the incompetence.

I really don’t know if I can even remember all of the controversial calls and non-calls in this year’s playoffs, just because there were so many, but the first one that probably resulted in a different outcome for a game and a series was in the first round, when Cody Eakin of the Golden Knights was given a five-minute major penalty for cross-checking Sharks captain Joe Pavelski.

I was rooting for the Sharks, and Pavelski’s injury was upsetting to see, but the truth is that the injury wasn’t a result of Eakins’ cross-check, it was a result of a second push from another player, which caused Pavelski to fall awkwardly. The cross-check itself probably should have been a two-minute penalty.

Still, while I think the Knights would have held on to win the series if the penalty was only two minutes, I can’t really feel badly for them getting jobbed by the refs. The Knights blew the series almost entirely by themselves; the major penalty left the door open for the Sharks, but the Knights should have closed the door a long time before that. This all happened in the seventh and final game of the series. The Knights had been up 3-1 in the series, and they were up 3-0 in game seven with 10 minutes left when the penalty was called. How about not giving up four goals on that five-minute power play?

It’s not a coincidence, though, that the referees who worked that game were deactivated for the rest of the playoffs after that series was over.

You Have To Hand It To The Blues

In game three of the Western Conference final, the Sharks won the game in overtime on Erik Karlsson’s goal after an illegal hand pass. Everyone watching in the building and on TV saw the hand pass – except the referees, apparently. Video review isn’t allowed for that type of play, so the Sharks got a big win on the road to take a 2-1 lead in the series.

You have to give the Blues a lot of credit for how they dealt with this. Lots of teams would have dwelled on it and let it affect them negatively going forward, but St. Louis put it behind them and won the next three in a row to close out the series.

Want to know who is probably happy that the Blues were able to do that? Yes, the Blues and their fans, obviously. But also, the referees for that game three. If the Blues ended up losing that series to San Jose, there would have been even more focus on the missed call. As it is, expanded use of video review in situations like this one is one of the topics for discussion at the league meetings this summer.

A Slew Of Missed Calls

In game five of the final, the puck was in Boston’s defensive zone when the Blues’ Tyler Bozak tripped Noel Acciari of the Bruins from behind, slew footing his legs out from under him. Acciari fell awkwardly, whacking his helmeted head on the ice, and was dazed and unable to get back up immediately. The Blues took advantage and scored on what was essentially a five on four.

This was a horrible non-call. It happened right in front of one of the referees; Bozak was so sure he was getting a penalty he started skating toward the penalty box until he realized that the referee didn’t blow his whistle.

And it wasn’t just horrible because of how obvious it was, but because of the impact. The goal gave the Blues a 2-0 lead with less than 10 minutes left to play. Given that the Bruins scored less than three minutes later, the non-call on Bozak’s trip was huge. Knowing how deadly Boston’s power play was, if that penalty was called, the Bruins might very well have tied the game up with Bozak in the penalty box, and taken the lead a few minutes later. I think it’s safe to say they would have at least been tied late in regulation, instead of down 2-1.

In the past, I haven’t really been one to push for more video reviews; I think it would slow the game down. And I also think people need to accept a certain amount of human error on the part of officials, because the game is played at a high speed and it’s impossible to see everything perfectly. But some of the cases in this year’s playoffs were just ridiculous, and when the stakes are the highest, teams (and fans) deserve better.

We all know the story by now, but it still bears repeating because it’s so amazing. The Blues were in last place in the entire league on January 3, and ended up winning the Stanley Cup. They did it with a rookie goalie who didn’t start his first NHL game until January 7, a coach who came in as a mid-season replacement for a fired predecessor and still had the title of “interim head coach” when he lifted the Stanley Cup, and a roster with no past Stanley Cup winners.

Those are some of the inspiring aspects of the Blues’ run. At the same time, there’s one aspect of how they won that bothers me. They were guilty of a lot of head shots in the playoffs, with several of them resulting in injuries to opposing players. And on a lot of those head shots, it seemed like the Blues’ players were intentionally targeting the head.

I don’t think it’s any coincidence that the Blues are the first team ever to have multiple players (Oskar Sundqvist and Ivan Barbashev) suspended in the Stanley Cup final for infractions in the series. Both got suspended for head shots. If I’m not mistaken, I think one of them also was the guy that landed a head shot on Tomas Hertl in the Western Conference final, causing Hertl to miss the rest of that series.

I’m all for physical hockey, but targeting the head is dirty, plain and simple. The fact that the Blues used those tactics en route to winning the Cup leaves a bad taste in my mouth. On the bright side, I don’t think they’ll be able to get away with the same thing next year. Whether it’s “frontier justice” administered by the rest of the league during the regular season, or more scrutiny from officials, I have a feeling they’ll tone it down before next year’s playoffs (assuming they make it).

This is pretty self-explanatory. Just a quick list off the top of my head of some people that either helped or hurt their stock during the playoffs.

Tuukka Rask, Marcus Johansson, Torey Krug, Jake DeBrusk, and Charlie Coyle of the Bruins: All played some of the best hockey of their careers in the playoffs; Rask was the best goalie in the playoffs.

Craig Berube: I don’t like how his Blues went headhunting, but he deserves credit for getting everyone to buy in and consistently play the same style both defensively and offensively.

Logan Couture: The Sharks didn’t even make the final, and he still led the league with 14 playoff goals.

Dougie Hamilton: Remember what he did in the first round against Washington? He veered away from a loose puck in his defensive zone because he didn’t want to take a check from Alex Ovechkin; Ovechkin got to the puck first, made a pass, and the Capitals scored. That’s bad enough, but then after his Hurricanes eliminated the Islanders in the second round, he gave a mocking pat on the head to the Islanders’ Brock Nelson in the handshake line. That’s way too much arrogance for a guy who skated away from the puck because he didn’t want to get hit.

I hope you enjoyed this look back at the 2019 NHL playoffs. How did you feel about the postseason? Were you happy that St. Louis won their first Stanley Cup? Do you agree or disagree with my “Ups and Downs,” or have any others that you would add? And what were the most memorable stories of the playoffs in your view?

Please let me know in the comments section below – some friendly debate is always a good thing!