Let’s talk about flex, baby! Have you ever wondered about some of the great mysteries of life? Questions like: What is hockey stick flex, anyway? How important is it? Why didn’t sticks have flex numbers stamped on them back in the old days? Is this just a marketing gimmick, like “Corinthian” leather?

Well, I’m going to try to unravel the mystery of hockey stick flex here – what it is, how it’s measured, and why it’s (usually) important. Let’s jump right in!

What Is This Flex Thing?

OK, the short version of the answer is that flex is a measure of the stiffness of a hockey stick. Basically, the lower the flex number, the more flexible the stick is. I know, that’s a little counter intuitive. Since it’s called the flex number, some people think that a higher number would mean more flexibility, and I get why, but it’s actually the opposite. 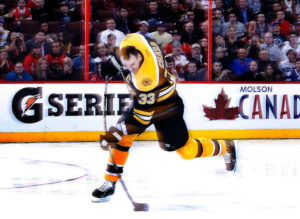 The reason why a lower flex number means a stick is more flexible makes sense when you understand what the number represents. The flex number indicates how many pounds of pressure it takes to bend the stick one inch. So, a stick that has a flex number of, say, 30 is much easier to bend one inch than a stick with a flex number of 100.

So, What’s Your Number?

Remember, though, that the “half of the player’s weight in lbs.” rule of thumb is not a precise, set-in-stone calculation, it’s a guideline. It might end up being the exact flex that a player should go with, but first there are some variables to take into account. Depending on these variables, a player may want to adjust the flex number of their stick up or down slightly.

The Long and Short of It

The first thing to consider is if the stick is going to be cut down to shorten it, or have an extension added to make it longer. The flex for a stick is measured based on the standard length at which the stick is manufactured, but since the majority of players cut sticks down slightly, and some add extensions, this will change the feel of the stick from what the flex number would indicate.

Some manufacturers put numbers on the back of the stick shaft at the top to show what flex the stick would feel like if it was cut down to that length.

The Flex Is Strong in You

Lastly, think about playing style. Players who wind up for big slap shots might want to add a few points, while players who take mostly wrist and snap shots and prioritize a quick release might be better off taking a few points off.

These last two considerations shouldn’t change the flex number very much. They should really just be used to decide whether to round up or down if a player’s weight and stick length adjustment put them in between two available flexes.

Now that we’ve gone over the different things to consider in deciding what flex a player’s stick should have, let’s walk through a couple hypothetical scenarios using the examples from earlier.

First, let’s consider the 130-lb player. Based on the rule of thumb of dividing the player’s weight (in lbs.) in half, the player would need a 65 flex stick. But, this player is going to cut their stick down about three inches. This will increase the stiffness, meaning the stick will feel like a 70 flex after being cut. A 60 flex would feel like a 65 after being cut by three inches. This player happens to be of average strength for their weight, so we don’t need to do any more adjustments; this player should get a 60 flex stick.

Next, let’s look at the 200-lb player. Again, the weight-based rule of thumb says the player should use a 100 flex stick. But, this player is tall and is going to add an extension to the stick, which will make it feel like it has a lower flex number, so to compensate, they’ll want to go with a slightly higher flex number – say, 105. This player also has average strength for their weight, so they should get a 105 flex stick.

The Same, But Different

Sometimes two sticks with the same flex number will feel different. This is because even though all manufacturers are using the same definition of flex that I described earlier – how many pounds of pressure it takes to bend the stick one inch – they might use slightly different methods when they take that measurement.

One manufacturer might measure from the ends of the stick’s shaft; another might measure slightly down from the top and up from the taper at the bottom of the shaft. This difference means that two sticks labeled as flex 75 could feel like they have different amounts of flex.

Another reason that two sticks with the same flex could feel different is that they have different kick points. What is the kick point? I’m glad you asked…

Kick point refers to the location along the shaft of the stick where the stick flexes the most. You’ve probably seen pictures of a player’s stick bending as they take a shot, right?  If not, take a look at Zdeno Chara’s stick in the picture up at the top.  When the stick is flexed, it contains potential energy; as the shot is released and the stick returns to being straight, that energy is transferred into the shot. Basically, the flexing of the stick allows you to get more velocity on your shot. 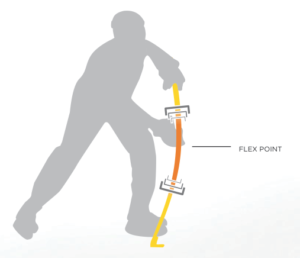 That makes it sound like a mid kick point would be better, right? Well, not necessarily. The flip side of this is that with a lower kick point, the stick doesn’t need as much time to flex and straighten out, which means that the shot can be released quicker. A mid kick point stick takes slightly longer to store and transfer the energy into the shot. 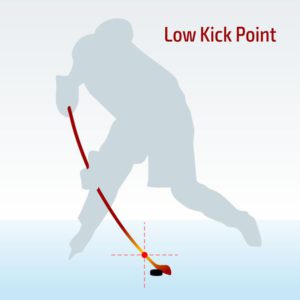 Kick point is a matter of personal preference, but if I had to make a generalization, I would say that a mid kick point is more suited for players who take a lot of slap shots, while players who usually need to get the shot away quickly (one timers or shots in high-traffic areas) might prefer a low kick point.

I hope that after reading this you have a better understanding of hockey stick flex. I’m interested in hearing from you – if you have any comments or questions about this post, or about hockey stick flex in general, please leave them below.

4 thoughts on “What Is Hockey Stick Flex (And Why Does It Matter)?”