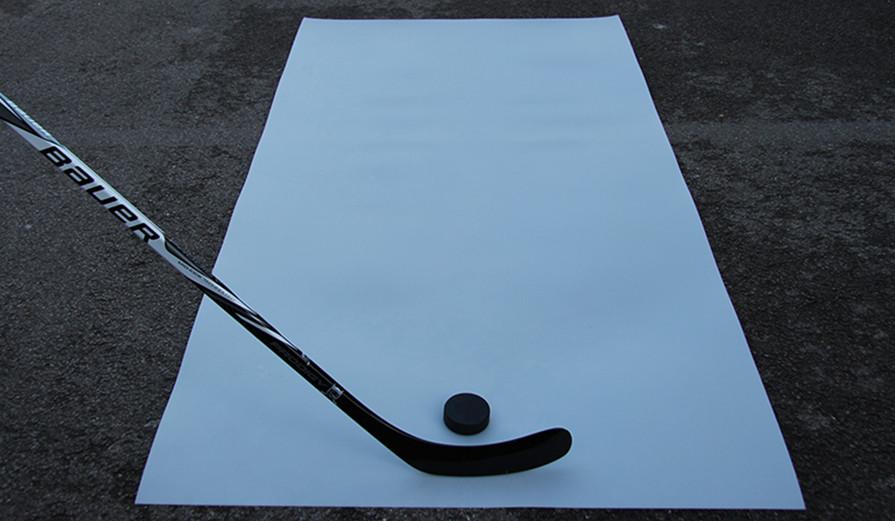 Today I want to talk about a training tool that is seen more and more frequently these days in driveways, backyards, and pretty much anywhere that people work on their hockey skills. That tool is the hockey shot pad.

I figure this is the perfect time to talk about it. Now that hockey season is starting up again and players are getting back out on the ice, they may be finding out that they could use some extra practice in certain areas of their game. That could be because they moved up to a better team and/or a higher age group and want to hold their own against tougher competition, or maybe they just want to knock the rust off and feel in the groove sooner.

Whatever the situation, a hockey shot pad is a great tool for working on both shooting and stickhandling skills. Pads are available in a few different formats: a stiff board, a roll-up mat, or interlocking tiles.

As a result, there are lots of questions to answer when figuring out what kind is best for you. Who is going to be using it, and for what? Where will it be used? What is your budget? How handy are you (and do you want to use your DIY skills)? Let’s take a look at all the variables to help you figure out the best option for you.

Who Is Using It, And For What?

Like with almost anything else, shooting pads are available in different sizes. They can go from in the neighborhood of 2′ by 4′ on the small side up to 4.5′ by 10′ or even bigger. Also like with other things, there are pros and cons for both bigger and smaller pads.

A 2’x4′ pad would be suitable for very young players to work on basic stickhandling and snapshots. They might be able to use it for wrist shots too, but only if they’re small. Once they are around age 8-9, they’ll probably need more room for the full motion of a wrist shot.

Older players – basically anyone who is eight or older, in my opinion – would need a larger pad. How much bigger depends on what 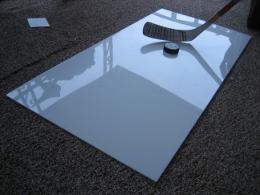 they’re going to work on, but keep in mind that if a pad that’s four feet long is going to be borderline in terms of having enough room for an eight-year old to take a wrist shot, then a teenager or adult is likely to want at least a couple more feet in length.

I mentioned that a pad that’s two feet wide would allow very young players to work on basic stickhandling. For a lot of younger players, and some older ones too, that’s really all they need to practice – the basic back-and-forth, side-to-side motion. In fact, in a way, a smaller board that doesn’t give players room to do much more than that could be helpful in that it forces them to master it.

Once a player is ready to move on to other moves, though, they will once again benefit from a larger pad. That way they can practice not just going side to side, but also moving the puck forward and back.

Lastly, any player looking to work on passing-related skills would most likely want a larger pad. That would allow them to use a pass rebounder or even have someone else feed them pucks for one-timers.

Part of figuring out which pad is right for you depends on where the pad will be used. The location matters not just for what size pad, but also what type (single board, roll-up mat, or interlocking tiles).

Smaller pads have the obvious benefit of taking up less space, both while they’re being used and when they’re put away. That said, I think the space taken up while in use won’t be that big of an issue in most cases, especially if the pad is being used on the driveway or in the yard. If it’s in the basement or the garage, space may be more of a factor. I’ll come back to that, though, because I want to talk about it in connection with the type of pad.

As far as storage, when it comes to the single board shooting pads, there won’t be much difference. Whether it’s a 2’x4′ or a 2.5’x5′ board, you’ll probably just lean it against a wall in the garage or basement. Some people make their own boards (more on that in a minute), and go as big as 4’x8′, so that size would take up a little more space, but I don’t think it would be a dealbreaker.

The roll-up mats are available in sizes up to 4.5’x10′, so when rolled up, a mat will take up about the same amount of space as a rolled-up 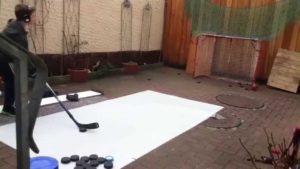 area rug (about 4.5′ tall). But, you may not feel like unrolling the mat and then rolling it back up each time you use it. Besides that, the mat will need some time to flatten out from being unrolled – probably a few hours at least.

The mats are thin (1/10″) and roll up easily, but personally, I wouldn’t want to have to unroll the mat and let it sit for a while to flatten out every time I wanted to use it. If you feel the same way, then a roll-up mat might only be an option for you if you have room in your basement or garage to leave it unrolled indefinitely. If you don’t mind that small bit of labor and time, though, the mats can be used on a driveway, as long as it’s a smooth surface.

With the interlocking tiles, you can buy them individually and customize the size and shape of your pad. So, the amount of space needed to store them when they’re not being used can vary, but they’re very easy to assemble and take apart if you need to – a matter of a few minutes. One popular style comes in 18″x18″ tiles, but there are also 12″x12″, 4’x4′, and 4’x8′ products on the market.

The tiles can be used on any flat surface, indoors or outdoors, as long as it’s not too bumpy or soft. So a paved driveway, garage, or any room that doesn’t have soft carpeting would work. If they’re going to be left outside for any length of time, it’s best to cover them with a tarp to protect them from debris (e.g., leaves that could leach color onto the tiles, animal droppings, tree sap, etc.).

OK, now let’s get down to business and talk about how much a shot pad will set you back. There’s a range depending on what size and type of pad you get.

Again, since the tiles can be purchased in any quantity to build a shot pad with whatever dimensions you like, the cost can vary. That being said, since the tiles also are sold in standard volume packages that offer a lower price per square foot than the individual tile price, it’s a good idea to estimate the minimum area you want your pad to cover, then see if there is a package that’s close to, but below, that square footage. Then you can buy additional individual tiles at the a la carte price if needed.

That approach will allow you to get the most bang for your buck if you’re buying the tiles. If you realize down the road that you want a bigger pad, then you can always add more tiles. Just remember to get the same model so the new ones will work with your old ones!

As I mentioned earlier, some people build their own shot pad instead of buying one. The main benefit of this approach is cost savings. It also gives you more control over the size and shape of your pad compared to a single board or a roll-up mat.

There are downsides to building your own pad. One is that it does involve a bit of prep and maintenance; nothing terrible, but some people don’t want to deal with that. Another drawback is that a homemade pad is less predictable in terms of how well it will work – that is, how close it is to real ice as far as puck glide. I think a well-made pad can perform as well as a manufactured one, but not better. And sometimes it takes a couple tries to make a pad that works really well, which negates some of the cost savings.

For a DIY pad, you’ll need to figure out what size pad you want, then go to a hardware store and get a board in that size. You can use 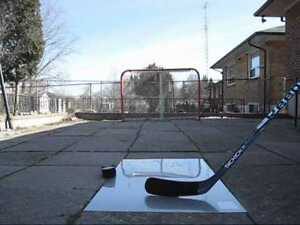 melamine, HDPE (high-density polyethylene), or a Hardboard Thrifty Tile board, which costs less than $15 at Home Depot for a 4’x8′ sheet.

To make the board slick so pucks will slide on it like they would on ice, you need to use either silicone lubricant or furniture polish (e.g., Pledge). Apply it to the entire surface and rub it in well, making sure that you wipe away any excess. Once it has dried completely, you can use the board. The slickness from the silicone or furniture polish should last awhile (i.e., several hundred shots at least), but you may eventually have to do a second application.

As you can see, there are a lot of factors that go into determining what kind of shot pad is the best fit for your needs. In my opinion, a bigger pad gives you more options. Not everyone has the space to accommodate a bigger pad, though, and of course as the size of the pad increases, so does the price.

Still, for those that want a large pad and don’t want to build it themselves, I think that the flexibility of the interlocking tiles to change the size and shape of the pad gives that type the edge over a roll-up mat. If you want to check pricing on an excellent interlocking tile system, click here.

If you’re on a budget, then I think building your own pad is probably the best approach. As long as you’re willing to do a little work to prepare and maintain the pad, and will store it someplace where it isn’t exposed to the elements, a homemade pad will give you a good combination of performance, low cost, and flexibility regarding size.

OK, now that you’ve heard my thoughts and recommendations, I want to hear from you. Have you ever built your own hockey shot pad, and if so, what materials did you use? How well did your pad work? Have you used manufactured pads, and how would you compare them? Please share your comments and ask questions below – thanks!

10 thoughts on “Build Or Buy? The Best Hockey Shot Pad For You”