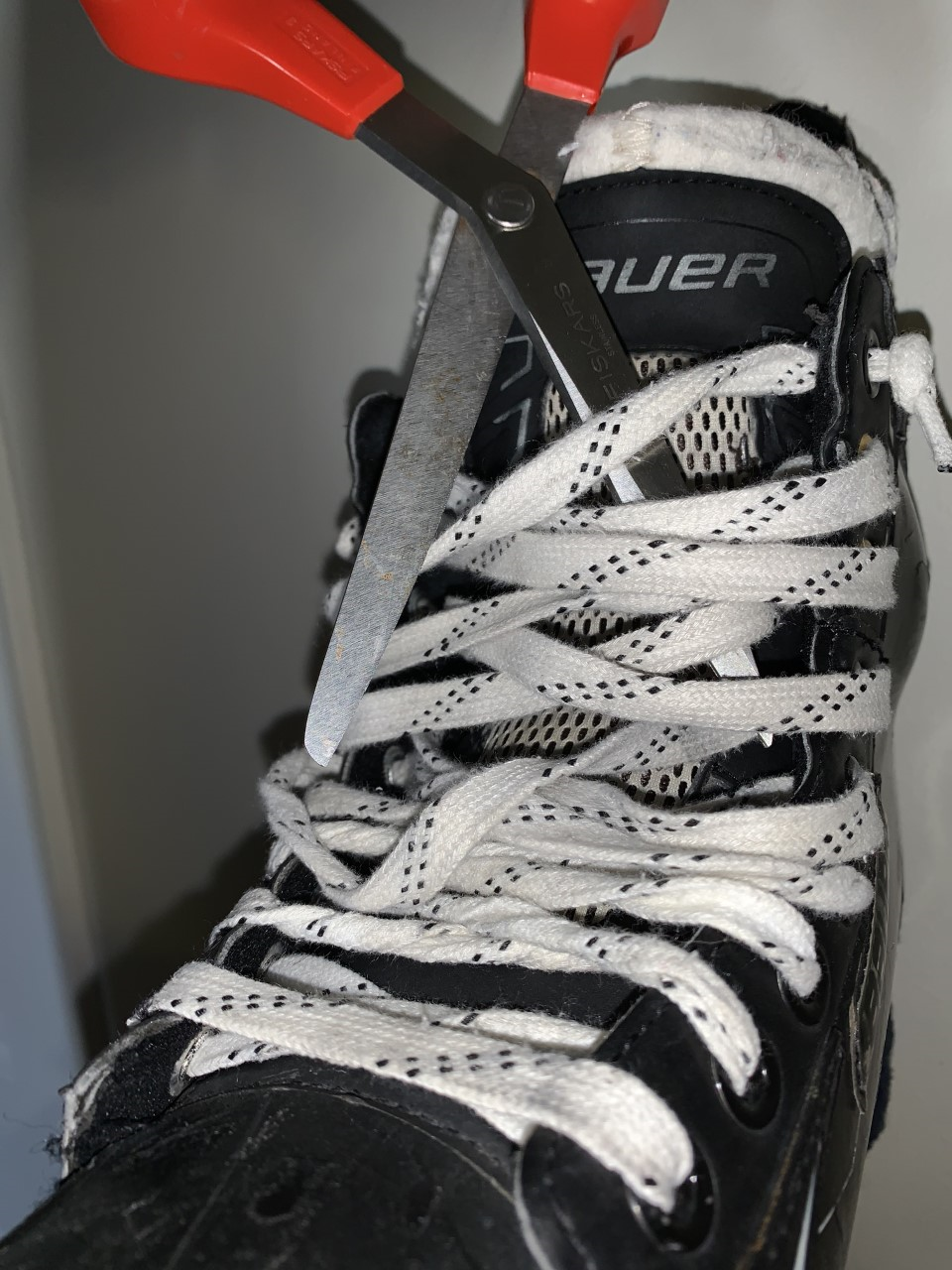 Since today is April Fools Day, this seemed like a good time for a post about great hockey pranks. With the Coronavirus forcing us to stay home, I’m sure that many people are feeling slightly stir crazy. I figured some laughter might help lighten the mood and relieve a little bit of stress.

Let me say, I approach April Fools Day with a mix of bemusement and caution. That’s because my kids love to play pranks on me. In the last few years, they’ve celebrated this day with a few good ones, including:

So, every year when I go to bed on March 31, I’m a little nervous about what I’ll wake up to the next morning, but I’m also kind of proud of them. That said, just like it takes a lot of work to get NHL-caliber skills on the ice, my kids will need to continue developing their prank game if they want to reach the pros’ level.

Oh, and in case you’re wondering, this morning I woke up and opened my bedroom door, only to find the doorway blocked by a wall of Saran wrap.

Anyway, let’s go ahead and look at some of the funniest hockey pranks of all time.

Some of the most popular hockey pranks over the years have been ones that involve doing something to a teammate’s equipment. This is probably even more true at the NHL level, for a couple reasons.

First is the simple matter of accessibility. Unlike, say, a high school team, NHL players don’t take their equipment home with them after practices and games. They’re also more likely to be out of the dressing room and away from their equipment while it’s just lying around – talking to the press, for example. That gives teammates more opportunity to execute their nefarious plans.

Second, pranks involving equipment sometimes render that equipment unusable, at least in the short term. Since NHL teams have equipment managers and stockpiles of gear, it’s a little easier to get a replacement quickly.

This one is a classic that teammates have been pulling on each other for generations. You can probably figure out what this entails – it’s pretty obvious from the heading – but there are a couple different approaches, each with its own merits.

Some people have been known to go with a stealth attack. That means partially cutting the lace on each skate, just enough so that the lace will snap when the player pulls hard when tying their skate. If possible it’s better to do this partial cut in one of the last few lace rows. Having the lace break after being almost done tying the skate will make it just a little more annoying.

If subtlety isn’t what a player is going for, they’ll just cut right through every row of the laces. If they really want to get under a teammate’s skin, they’ll do that, and then tie knots on both ends of each lace segment. The player won’t be able to just pull the cut pieces out through the eyelets, they’ll need to get a pair of scissors themselves first and cut an end off of each piece before they can pull them out.

This prank has become a lot more common than it used to be, probably because clear hockey tape didn’t used to be a thing back in the day. People weren’t usually carrying around clear Scotch tape in their hockey bag. Now that we have clear hockey tape though, it creates a lot more opportunities for players to execute this prank. It doesn’t require a lot of time, and it’s easy to do without the tape being noticeable.

Teams usually gets a good laugh when they see a teammate wipe out as soon as they step on the ice because of the tape on the bottom of their blades. Still, this one does carry a slight risk of injury, and more than slight if the player isn’t wearing full protective gear (especially including a helmet), so I’d recommend just enjoying the videos of this one rather than actually pulling it yourself on one of your teammates.

This one isn’t seen quite as frequently as the first two. That’s probably because it requires a little more time and raw (or cooked) materials.

Basically, the idea is to stick some kind of food item in a teammate’s hockey gloves, preferably right before they are about to head out on the ice. If it’s possible to fit the food in the fingers of the gloves, that’s ideal. I’ve heard of this being done with cocktail weiners, miniature pickles, even croutons.

Alternatively, some players have slipped their hand into a glove to discover a hot dog, complete with bun, stuffed inside. I guess this is the route that teammates take when they’re limited on time and menu options.

Ok, so after all those pranks, you’d think that once a team gets on the ice that the pranks would cease, right? Well, not exactly – it turns out that there’s no safe space for hockey players when it comes to pranks.

One on-ice prank goes something like this. Just before his first NHL game, a rookie is approached by the team captain and asked to lead the team out onto the ice for pregame warmups. That has to be a thrill, right? So he charges out of the tunnel and skates hard, looping around at center ice. When he turns, though, he sees that nobody has followed him; his teammates are all watching from the tunnel, while he skates around in circles by himself in front of all the fans.

This is a prank that has gotten pretty popular in recent years, but that probably makes it harder to pull off without the subject knowing what’s going to happen. I’d imagine that rookies aren’t necessarily fooled by this one anymore, they’re just going along with it for fun.

Another that has stood the test of time is to loosen the cap on a water bottle so that when a teammate gets back to the bench and goes to squirt some water in their mouth, the cap pops off and the entire bottle is emptied on their face.

Some pranks were very common back in the day among NHL and other professional players, but aren’t as popular now. In particular, I’m talking about ones involving permanent alterations to a teammate’s wardrobe.

Yes, in the 1970s, the NHL experienced dramatic increases not just in player salaries and fighting on the ice, but also in the number of cut ties. For whatever reason, players took joy in lopping off the bottom of a teammate’s tie. If somehow they could get access to his suitcase and shorten all the ties inside at the beginning of a multi-day road trip, all the better.

This prank wasn’t just limited to ties, though. Apparently when Team Canada returned home after finishing the Summit Series against the Soviet Union in 1972, some of the players and staff were sleeping very soundly during the flight (thanks to some adult beverages the night before). Dennis Hull took that opportunity to cut several inches off the bottom of at least one sleeping teammate’s pant legs, which must have made for an interesting look when the plane landed and the Prime Minister was waiting to meet the team.

Best of the Rest

I’ve heard about lots of other great hockey pranks over the years: coating a teammate’s hotel room door knob or phone earpiece with Vaseline, or putting milk in their water bottle. But one of my favorites was about Guy Lapointe, who once pretended to be too full to touch his dessert at a team dinner. He offered it to Ken Dryden, who though he was getting vanilla ice cream covered in chocolate sauce, only to discover that it was sour cream under the chocolate sauce.

Thanks for reading, I hope you enjoyed this post! Have you ever pulled any of these pranks on someone, or have you been on the receiving end of any? Please let me know if you think I left out any good hockey pranks, too!