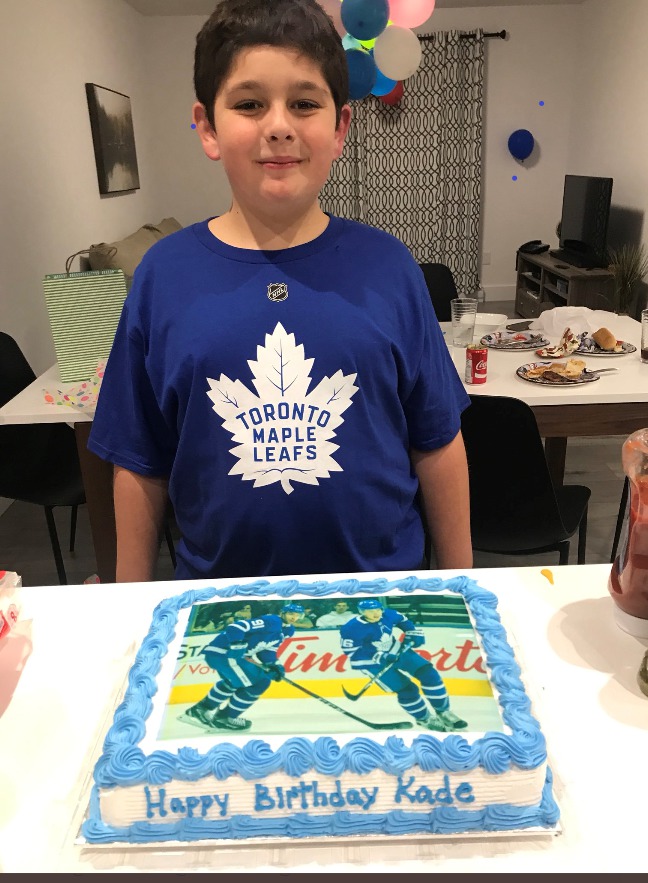 In the past few days, there was a story that has gotten quite a bit of attention online, and it has reminded me of why hockey is great. This has been a much-needed counterbalance to the story about the off-ice misbehavior of a Long Island team that I wrote about recently. Just like I felt compelled to write about that even though I didn’t enjoy it very much, I want to write about this story too, but doing so feels way more uplifting.

In case you’re not sure what story I’m talking about, here’s the background. This past Saturday night, a boy in Newfoundland was supposed to have his 11th birthday party, but none of his invited friends showed up. The next morning, his dad Tweeted a picture of his son, who is clearly a Toronto Maple Leafs fan, wearing a Leafs t-shirt and standing in front of a cake featuring a picture of Mitch Marner and John Tavares. The dad tagged both players and the team, and made a simple request for birthday wishes for his son from the general Twitterverse.

The dad, whose name is Jason Foster, is not a celebrity, or a social media “influencer.” At least he wasn’t until Sunday, and while he definitely has gained Twitter followers in the last few days, he probably isn’t going to pursue a new career as an influencer.

That’s what makes the response to his Tweet so heartwarming. Within hours, Jason’s Tweet received responses with birthday wishes for his son Kade from Marner, Tavares, and the Maple Leafs team account. Beyond that, the Tweet went viral and drew Happy Birthday messages from all over the hockey world: current and retired players; NHL, NWHL, minor league, college, and junior teams; executives; broadcasters; and journalists.

The Maple Leafs apparently are planning a belated birthday celebration for Kade, which both Marner and Tavares hinted at in their messages. Presumably this will include a trip to a Leafs game and a chance to meet the players – certainly a big deal for any young fan.

In addition to all the support Kade got from within the hockey world, there were many others who sent along birthday wishes. These included entertainers (Ben Stiller, Mark Hamill, Zach Braff, etc.), corporations (Pepsi, Chevrolet), municipal/government figures (Houston Police Department, Canadian Prime Minister Justin Trudeau), and of course many regular people.

As I write this, less than four days after Jason Foster asked his Twitter followers (which numbered less than 1500 at the time) to send birthday wishes his son’s way, his Tweet has received 178,000 likes, more than 53,000 replies, and has been re-Tweeted over 25,000 times. 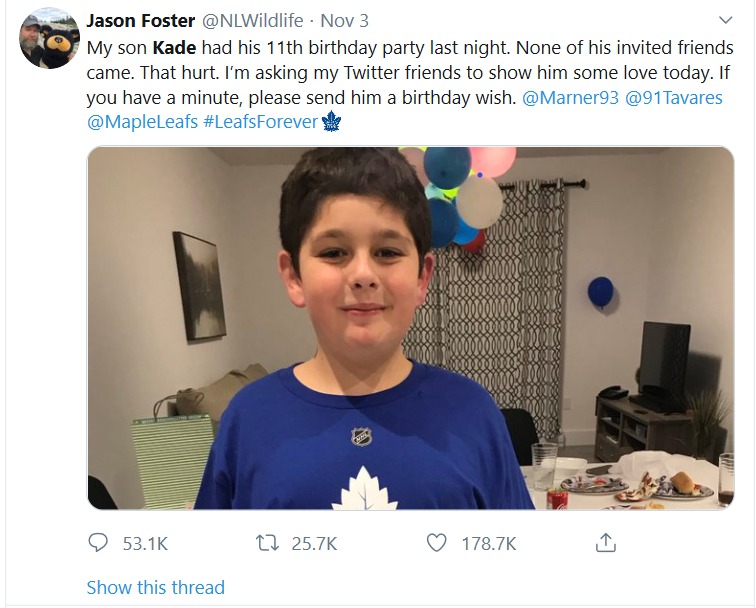 Something else that stands out to me is how Maple Leafs coach Mike Babcock reacted when asked about how individual players reached out to support Kade.  Rather than making a big deal about it, Babcock was nonchalant, like he wouldn’t expect anything else.

That low-key, “why wouldn’t you do something nice” attitude is the norm rather than the exception among hockey people, and that is very refreshing.

In the Penalty Box

The overwhelming support for Kade that was started by a single Tweet has, I would guess, diminished much of the sting of being stood up at his birthday party. Still, it’s hard not to wonder how the parents of the no-show kids could have dropped the ball so badly. I don’t know, maybe there’s a reasonable explanation, but it’s pretty standard practice after being invited to a party to let the host(s) know whether you (or in this case, your kid) will be there. And if you say you’ll be there, and something happens that legitimately forces you to change your plans, it’s not that difficult to tell the host(s). Why didn’t the parents of the kids that were invited do either of those? Unfortunately, I have a feeling that there was just a collective lack of common sense and/or common decency on the part of those parents. That’s a shame.

As is almost always the case when a story like this one goes viral, there will inevitably be a few people chiming in that are looking for something negative. They might question the basic facts of the story, basically saying that the entire thing was a hoax to garner sympathy so Kade and his family would get free tickets to games and other gifts. Or they’ll point the finger at the Maple Leafs and anyone else who responded with generosity, saying that they are just doing it to boost their public image so they can in turn make more money.

When it comes to people with this kind of Debbie Downer outlook, I don’t know whether to be angry, laugh at them, or feel sorry for them. I guess it’s a little bit of each.

In general, I can understand a little bit of skepticism in this day and age (Balloon Boy, anyone?). But I think Jason Foster’s Tweet, and the reaction to it, are an example of the good that exists in people, not the bad. Of course people misuse social media sometimes, but that doesn’t mean we should be so jaded that every time we see a story like this we assume the worst about the intentions and motivations of everyone involved.

Ultimately, this is a positive story that confirms what I already knew – that hockey people can be some of the most thoughtful and caring people in the world, especially where kids are involved. And it reminded me that humankind as a whole can be pretty amazing too. Even on social media.

I’d like to hear from you about this story. Why do you think Jason Foster’s Tweet got such a huge response from around the world? How, if at all, do stories like this one change your feelings about social media? Please leave your comments and questions below – thanks!

4 thoughts on “If You’re Wondering Why Hockey Is Great, Ask This Newfoundland Dad”