Over the last few days, I’ve been thinking about USA Hockey’s player development model, which is called the American Development Model (ADM). The ADM was launched 10 years ago, and definitely has had an impact on hockey in the United States.

Last week, my son and I were at the grocery store and we ran into one of my son’s teammates from last season and his mom. We chatted briefly, and she mentioned that her son’s team for the upcoming season has been having weekly practices over the summer.

I was a little surprised, only because this boy is a year older than my son and is moving up to Peewee this season, and isn’t on the highest team. I know that some teams in our organization have these weekly skates over the summer, but I had only heard specifically about the top team in each age group doing that, so I sort of assumed that the other teams don’t do it.

Part of my initial, instinctive reaction, I have to admit, was concern that if other teams are having these extra practices, and my son’s team isn’t, then my son will be at a disadvantage – that other kids are practicing more and acquiring new skills, or at least keeping their existing skills sharp.

That got me thinking about some of the same ideas that came up in my post last month about off season hockey training for kids. Specifically, I thought about whether the summer practices meshed with the principles of the ADM.

On a larger scale, I thought about the underlying goals of the ADM, and if those goals, and the ADM’s recommendations on how to achieve them, align with my kids’ and my goals for their participation in hockey. And so I decided to dig in a little deeper and write this post.

What Is The ADM?

In a nutshell, the ADM is USA Hockey’s program for player development, from the youngest kids through age 18+. While USA Hockey doesn’t require member organizations to adhere to the specifics of the ADM, they work hard to educate the organizations on both the overall philosophy behind the ADM and how to implement it. This includes an online treasure trove of practice plans and videos to help coaches, as well as coaching clinics and regional contacts for ongoing support.

What’s It All About?

At the heart of the ADM is the principle of making hockey fun for kids, which will in turn lead to kids developing a passion for it and, as a result, reaching their full potential. This principle is built on the foundational idea that focusing on age-appropriate development will lead not only to better hockey players, but better kids.

That’s the big picture, but let’s look at how the ADM puts those ideas into practice. I just mentioned age-appropriate development, which is intertwined with the concept of long-term athlete development; both are crucial to the ADM. Taken together, they emphasize that kids go through stages of physiological development that are “windows of opportunity” to make accelerated gains in certain areas. 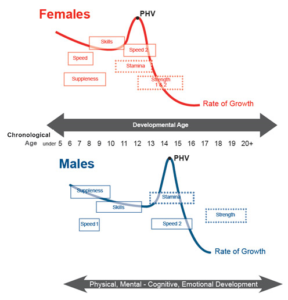 At the same time, they take into account the non-physical development timeline too. This, in conjunction with the physiological development stages, forms the basis for the ADM’s approach. For example, general athleticism enhances a kid’s ability to learn specific athletic skills in any single sport. That is why the ADM strongly recommends that kids not specialize in hockey before their mid teens.

This Isn’t How We Used To Do It

The long-term player development approach espoused in the ADM involves specific recommendations in many areas. Sometimes, these recommendations are quite different from how many youth hockey organizations have done things in the past.

One example of this is the recommendation to divide the rink and play cross-ice or half-ice, 4v4 games instead of one full-ice, 5v5 game until players reach 10U. This makes sense in a lot of ways. The distance between bases and from the pitcher’s mound to home plate are shorter in Little League than in MLB, right? The same idea is applied in lots of other sports too.

The benefits of smaller-area games for younger hockey players are obvious: more chances to touch the puck, more changes of direction to help develop skating ability, and easier to stay involved in the play. Like the ADM’s recommendation for younger age groups to have station-based practices with at least two teams sharing the ice, these all are intended both to develop skill and make the game fun, which of course will make kids want to continue with hockey.

A Push Forward Sometimes Gets Pushback

There are some aspects of the ADM that youth hockey organizations have been reluctant to adopt. One that stands out is the recommended practice:game ratio. This varies by age group but at the squirt and peewee levels it is at least three practices for every game.

The rationale behind this recommendation is that players develop more in practices than in games. And, part of the ADM’s philosophy of long-term athlete development includes not placing an emphasis on winning in the younger age groups. The more ice sessions that are used for games instead of practices, the more the coaching will focus on winning rather than skill development.

To put it in simple terms, sometimes kids who are the best players at, say, 10U aren’t actually the kids who have the highest potential in the long term. If coaches focus on winning at that age, that will give more development opportunities – in the form of more playing time in games, etc. – to the kids who are the best at that age, at the expense of other kids – including those who have the highest long-term potential.

There are a few angles to this subject of practice:game ratios. To start, I think USA Hockey is absolutely right about two things: kids improve more in practices than in games, and prioritizing winning in the younger age groups will hurt the development of some kids who might have very high potential.

That said, the fact of the matter is that kids like playing games. My son’s squirt team last season usually had two practices and two games per week. If they adhered to the 3:1 practice:game ratio, they would have played half as many games. I don’t think any of the kids would have been happy about that.

Like I said, kids want to play lots of games. But let’s be real, that’s not the reason that there’s pushback on the ADM’s recommended practice:game ratio. Want to know what the real reason is?

It’s grownups. The grownups who run youth hockey organizations, coaches, and parents. Many grownups would rather stick with what is familiar. In some cases it might be because they don’t agree with the ADM’s premise that fewer games will help players develop in the long run, but I don’t think that’s the reason most of the time.

No, I think that grownups are simply following human nature, and it’s human nature to be competitive. Organizations are hesitant to focus less on short-term results because they worry (rightly) that other organizations aren’t going to change.

This is why I think the ADM, for all the good it contains, has yet to see its full potential realized. That is because it isn’t a mandate, it is a set of guidelines and recommendations. And frankly, that was the best way to roll it out. If USA hockey had rolled out the ADM 10 years ago and forced organizations to comply 100% overnight, there would have been a revolt.

Now, though, we’re at a bit of a crossroads. To get organizations to commit to the ADM’s recommended practice:game ratios, USA Hockey is going to have to push them, using a combination of carrot and stick to reach full adoption. And they should, because while there has been buy-in on most of the other recommendations, the practice:game ratio is integral to the whole long-term development approach. Without buy-in on that, the ADM can’t completely achieve its purpose.

I hope you enjoyed this post. What do you think of the ADM? How do you think it compares to initiatives by other sports governing bodies? Please leave your comments or questions below – thanks!