Summer is almost here, so I figured people might be looking for some summer reading recommendations. With that in mind, I thought I would tell you all about some of the top hockey books that I have read.

This is just a small sampling, there are plenty of other good ones out there, so I’ll probably do more posts like this one in the future. In the meantime, I hope one (or more) of these sparks an interest for you!

Ken Dryden’s The Game is an absolute masterpiece. First published in 1983, the book is structured as a week-in-the-life type of memoir centered around one week late in the regular season of Dryden’s last year as a pro hockey player.

That would be interesting enough, and yet it doesn’t fully explain what the book is about. The Game can’t really be defined strictly as a memoir, or an autobiography, or even simply a hockey book. Each day of the week makes up a chapter of the book, but much of the narrative isn’t focused on the real-time events that are happening on that day, they are simply the springboard for more drawn-out thoughts on a variety of subjects.

Dryden is both philosophical and analytical in how he writes about these subjects, which include the dynamics of being part of a great team, the context of physical violence in sports, family and personal relationships, celebrity, and politics.

He also does what is essentially an in-depth character study of each player and coach on the team, which is fascinating. These are revealing, and not just in terms of learning specifically about the people that made up the Montreal Canadiens dynasty of the late 1970s.

Beyond that, it makes you think about group dynamics in general, and how all the different personalities in a group – whether a sports team, a company, or whatever – are like puzzle pieces, trying to fit together in a way that works for both the group and the individuals.

I really can’t express how much I like The Game. It seriously is one of my favorite books that I’ve ever read, and I mean any kind of book, not just hockey books. The 30th anniversary edition, which came out in 2013, includes a new chapter and foreword. And if you’re thinking that it might be dated because it was first published over 35 years ago, don’t worry, it still holds up today as a classic.

The Boys of Winter – Wayne Coffey 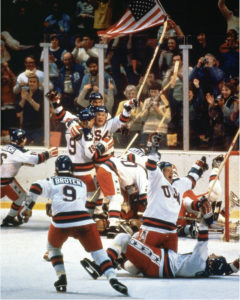 The full title of this one is The Boys of Winter: The Untold Story of a coach, a dream, and the 1980 U.S. Olympic Hockey Team. That should give you a basic idea of what the book is about, so I’ll just give you my thoughts.

Coffey structures the story similarly to how Dryden did with The Game. Instead of days of the week, though, The Boys of Winter is broken up into five parts: first period, first intermission, second period, second intermission, and third period.

In each of those sections, he tells what is happening during the famous game between the U.S. and Soviet teams, but then will launch into a character study of a particular player. He does this for each player, as well as for coach Herb Brooks, going into detail about their family upbringing, hometown, and path to the Olympic team.

I think this is a great book. Granted, I may be a little biased, but I think the story of the 1980 U.S. Olympic team is inspirational on a level that transcends sports. I liked the movie Miracle, but this book goes deeper. If you want to understand the real people behind the events, and not just the movie characters, then I would highly recommend The Boys of Winter.

Gretzky’s Tears: Hockey, America and the Day Everything Changed is a book about the blockbuster trade that sent Wayne Gretzky from the Edmonton Oilers to the Los Angeles Kings in 1988.

The trade affected more than just the players and franchises directly involved. It set in motion changes to the hockey landscape in both the United States and Canada.

Some of these changes, like how the Kings jumped up in the standings and became a hot ticket in LA, were immediate and obvious. Others, like the growth of hockey at the grassroots level in non-traditional hockey markets in the U.S., took years to be fully recognized and are still being felt today.

Brunt does a great job of looking back with the perspective of time to truly get a handle on the long-term impact that the trade had. I don’t necessarily agree with all of his views, but it makes for interesting reading.

The heart of the book, though, is about how the circumstances even came to be that allowed this trade to happen. There has been so much said about the trade over the years that I honestly thought I wasn’t going to get much out of this book. Well, I was very wrong about that.

I would highly recommend Gretzky’s Tears. Brunt did tons of research for this project, and it shows; the book is filled with juicy details that will be new to most hockey fans. That’s what makes it such a page-turner, even though we already know how the story ends.

Ah, the 1970s. The decade that gave us Watergate and the Ford Pinto also brought groundbreaking new television shows and some great music. It was a turbulent time, with huge changes rippling through society.

Hockey was no different. Hockey Night Fever: Mullets, Mayhem and the Game’s Coming of Age in the 1970s, by Stephen Cole, is a fascinating book that examines the cultural evolution of the game both on and off the ice during the decade.

Cole looks at the decade through the lenses of three different teams: the Boston Bruins, the Philadelphia Flyers, and the Montreal Canadiens. These three franchises dominated the ’70s in the NHL – not just on the ice, where they combined to win all 10 Stanley Cups in the decade, but in the media and the cultural zeitgeist as well.

The book sets the stage for how the ’70s unfolded by going back and describing the circumstances in the late 1960s, especially as it relates to the Bruins and Flyers. It’s really interesting to read about how the teams’ styles challenged each other.

The Bruins built a team culture where they mixed incredible talent with physical play and quick tempers. Then, the Flyers took it to a different level, becoming the first team to use intimidation and violence as a strategy.

The Canadiens were seen as a noble alternative to the Flyers’ methods, willing to stand up to bullies but preferring to win on skill. Cole does a great job of writing about how the difference in styles was almost a good versus evil thing, a battle for the soul of the game.

The one thing I wish Cole had spent more time on in the book is the World Hockey Association. The rival league, just by existing as an alternative option for players, forced the NHL to make major changes to its business model (e.g., increased salaries, lower draft age). The WHA was discussed, but I think more would have been even better.

That said, I loved Hockey Night Fever. Whether you want to learn about the forces that drove a decade of intense changes in hockey, or you just want to put on your polyester leisure suit, hop in the Pinto, and take a trip down memory lane, this is a great book.

OK, I was trying to stay in the ’70s spirit with a reference to that old RIF commercial, but I think that may have been from the ’80s – oh well. Does anybody else remember that commercial? Anyone? Bueller…?

Have you read any of these books, and if so, what did you think? What other hockey books would you recommend? I’d love to hear your comments below.