If you’re looking for an equipment bag for a young hockey player, there are a few things you’ll want to keep in mind as you do your research.  These seem like they would be pretty common sense, but you’d be surprised how many people don’t think about one or more of these when they buy youth hockey bags.  Too often, that leads to them buying a bag that isn’t a good fit for the young player using it.  As a result, either the player is stuck with a bag that’s frustrating or difficult to use, or the parents have to shell out more cash to replace it with a bag that works better for their child.

There are great hockey bags out there for young hockey players, but what is a perfect bag for one player might not work at all for another.  The goal of this post is to help you evaluate your individual situation and identify what needs are most important so you can choose a hockey bag that will be right for your young hockey player, and for you.

How Old Is The Player?

Timing isn’t important just on the ice, it can be a big factor when it comes to choosing a hockey bag for a young player.  Specifically, I’m talking about the player’s age when they start using the bag.

Generally speaking, I’m a believer that younger players can go with an “adult-size” hockey bag, with the reason being that as they and their equipment get bigger, their bag will have enough room to accommodate it.  This means you won’t have to replace their bag after, say, two seasons because of space constraints (even though it’s still in good condition).  The larger bag may cost you more money than the smaller bag, but if you’re going to end up needing a larger bag in a couple years anyway, starting with a smaller one first ends up costing you more in the long run, and who wants to spend more?

Now, there are some situations where I don’t think it makes sense to go with a larger bag.  One is if the player is very young and you’re not sure that they’ll stick with hockey for the long haul.  In that case, my recommendation would be to go with a somewhat smaller bag. That’s especially true if you don’t have another kid who might take up hockey later.

Another reason you might want to start with a smaller bag is if you think you’ll still be able to use it even if the player either stops playing hockey or continues and eventually needs a bigger bag.  Maybe that small- or medium-sized hockey bag will work as a trusty checked bag on flights; it’ll probably be easier to spot on airport luggage carousels, for starters.  It might come in handy when your hockey player gets older and needs to pack for summer camp, or when they’re going away to college.

A regular duffel bag or suitcase wouldn’t work well as a hockey bag, but hockey equipment bags can be used for other purposes, so why not take advantage of that?

Where Will the Bag Be Kept?

This sounds like a silly thing to consider, but it’s worth mentioning.  You want to be sure you have a convenient spot for the bag at home so it’s not an eyesore or an obstacle.

If you have room in your basement, mud room, or somewhere else, then nothing to worry about here.  However, if you plan to keep the bag in a small space, like a closet, it’s worth checking the dimensions to make sure there’s enough room for the bag.

As an example, when I was a kid, I kept my duffel-style hockey bag in my bedroom closet, which was wide but not deep.  I’m not sure one of today’s suitcase-style wheeled bags would have fit in that closet because of some shelving on the back wall.

Again, this sounds like a minor point, until you realize that you don’t have a convenient place to put the bag away and it’s always sitting out in the middle of the floor.

How Well Does It Fit In Your Car? 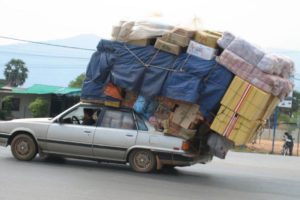 Similar to my point above about getting a bag that will be easy to store at home, you also want to make sure transporting the bag in your car isn’t a hassle.  Now, let’s be clear – unless you’re driving an old MG two-seater, fitting one hockey bag in your car shouldn’t present any problems.  This point is mainly for people who have two (or more) hockey players and will need to fit multiple bags in the car at the same time.

The main thing I want to emphasize here is that if you’ll be transporting two bags, assume that the bags will be full – if not now, then in the future when your kids have bigger equipment – and you won’t be able to compress them much to fit them in the back of your car.  That is definitely true with suitcase-style wheeled bags, since the bags have a solid frame on the back and bottom.  That said, depending on what kind of car you have, you may be able to stand one or both bags up in the back end in order to fit them both.

Duffel-style bags can be twisted, pushed, and squished to get them to fit a little more than wheeled bags can, but still, my recommendation is to measure your car’s trunk or back end to know the maximum dimensions you have room for when it comes to hockey bags.  And if you buy larger bags for your kids now with the idea that they’ll be able to continue using the bags as they move into larger equipment, the bags won’t be completely full just yet.  You’ll still have some empty space in the bags that will allow you to squeeze them into a tight area.

Ultimately, young hockey players and their families have different sets of circumstances that will determine the hockey bag that works best for them.  My advice is to think about your particular circumstances in the context of the topics I outlined here to decide on a hockey bag for your young player. A hockey bag won’t make a player skate faster or shoot harder, and it won’t eliminate the traffic on the way to the rink (unfortunately!), but if you find a bag that works for your player and you, it will make life better.